We evangelists’ kids were curiosities even back then.  I still get the most questions about 1) The tents 2) The music 3) The tents.

Our family’s revivals started with tents seating a few hundred people, and eventually held about 3,000. That was as big as Daddy was willing to get. 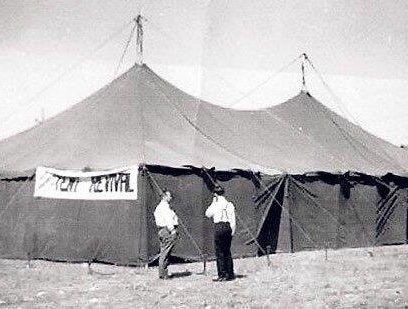 This tent resembles some of our earlier ones. Most evangelists didn’t own their tents. They were rented and arrived in a truck for local assembly.

By the mid-50’s, a different kind of tent revival appeared. Brother Oral Roberts was out there on the same path we followed, with a huge difference. Instead of the two and three-pole tents most of us rented, he owned his own,  billed as “The world’s largest fireproof tent.” It seated close to 20,000. 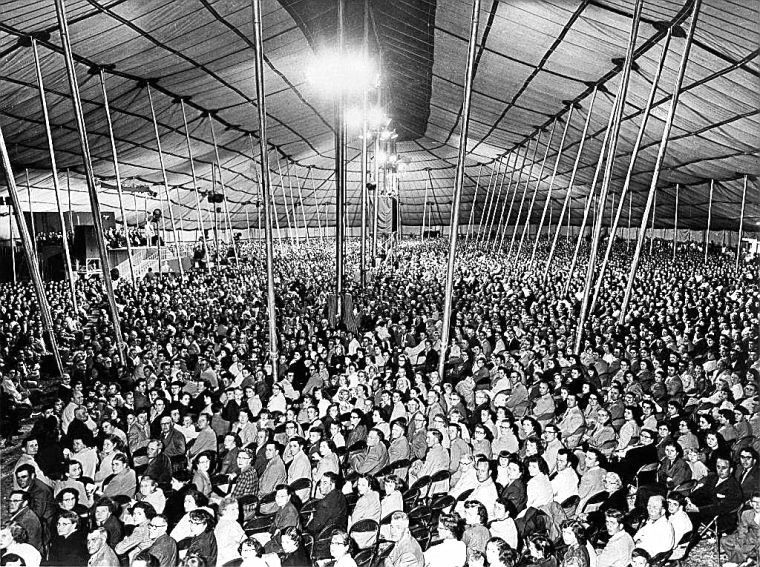 We visited his tent the night a storm in Amarillo lifted up the heavy metal center poles and set them swinging, the biggest fear of evangelists in the Deep South.

Here are excerpts from The Glory Road (both the book and stage play) about getting ready for a tent revival.  This was repeated countless times by The Joneses all over the South.

Our gospel caravan was fueled by Hershey bars and snow cones, Co-Cola and Dr. Pepper, Moon Pies from every gas station, Royal Crown Cola on the road to Oklahoma, Peanut Patties in Georgia, Orange Crush in Mississippi, biscuits and grits in Arkansas, tamales in El Paso, Po’ boys in Louisiana and baloney sandwiches all over the place.

Daddy went off to meet with the ministers of the region and the construction crew and the electricians and the people who rented us folding chairs, and a couple of roustabouts, strong men who earned their keep as soon as trucks carrying the tent and equipment rolled up to the edge of the field.

He supervised every detail of our tent going up. Leslie Ray and I could go along with him all day if we wanted to, over to a church office, to a midday dinner in a cafe with local backers and then out to the field, where sponsoring ministers floated around the site watching Reverend Raymond Jones, the charismatic evangelist, swinging a mallet and driving tent stakes into the ground alongside the crew.  We’d seen and heard all these details many times, but we went along to remove ourselves from the case of nerves that struck Sister Fern Jones before just about every revival.

That first day while Mother unpacked at the motor court, the field where the tent would be was already buzzing.  Trucks arrived filled with people who drove out to watch the tent go up. Children stayed home from school to see it. A circle of onlookers surrounded the proceedings all day.

Workers laid the tent sections flat on the ground then push them up with big tent poles and stretch the guy-wires tight.  Before departing , roustabouts taught volunteers how to work the flaps every night, some flaps up, some down, employing a specific choreography intended to outsmart the weather.

Daddy and Mother always conferred about how everything would look, the sign out in front, the cross behind the podium, the altar, and Daddy had specific measurements he was comfortable with for the platform.  Several steps were needed and a ramp was built for loading sound equipment and a piano. A generator was concealed behind a tent flap. Our car became our own backstage area. Every night, Leslie and I carried music and instruments and helped set up.

Another truck rolled up and deposited a piano. Daddy directed them to place it at a specific angle so the crowd could see Sister Fern  and also so the music-makers could see the congregation.

A bunch of kids, including us, sprinkled sawdust on the ground under the tent.  When we heard the putt-putt-putt of a small crop duster, we looked up as handbills about the revival floated down from the sky. The pilot swooped away, going on to drop the brightly colored fliers all around the area.

Rain or shine, by late afternoon long before the service began, parking fields filled with carloads and truckloads of families eating the food they packed for their trip.  Crowds were already milling about even before Daddy made his last stop on the platform to check the sound. No matter how many times the sound system was checked in the afternoon, he always made one last check as the seats filled. He asked a sponsoring pastor,

“You got us some people working the flaps tonight?  Sky’s mighty dark.”

“Got volunteers standing by.  They’ll open every other flap if they need to.  Keep it cool in there ’til we have to close ’em.”

Daddy looked up, gauging the clouds.

“I reckon we’ll just have to let the mosquitoes and lightnin’ bugs in with the sinners.”

“That’s right.  If we close those flaps and a good wind comes up, y’all will all be lifted up to heaven way ahead of schedule!”