We are looking for a card for her mommy. She used to draw her own cards and they were filled to the edges with hearts and flowers and xxxxoooo, but since she learned to read, she prefers to pick one herself from the selection at Target.

When I’m in her town, we shop together. It turns out many of the cards on the bottom rows – the only part of the rack she can reach – are the ones featuring bad puns and broad humor. She’s loving this. I reach up to show her several cards with sweet sayings.

Me: “Look, they have other kinds of cards here too.”

She’s 7. She loves princesses and pink, but is equally fond of gross, and, I quickly learn, she’s a very independent shopper. Her sense of humor involves all things icky and yucky, and when rude sounds can be incorporated, all the better. If memory serves, her Mother’s Day card featured a monkey. For Easter, she chose a card with two cartoon rabbits teasing each other.

She: “This is hilarious!”

And she was right, of course.

Until she gets taller, the sentiment is circumstantial, and based on what I’ve seen of the bottom row, her mom can expect lots of animal jokes and things that pop out when she opens her cards. Mom may someday receive more hearts and flowers, but she’ll have to wait ‘til her kid can reach the next rows up. 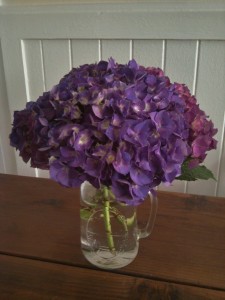 I’m trying to keep my expectations realistic about the blue hydrangeas.

I haven’t heard a peep from those divas yet. 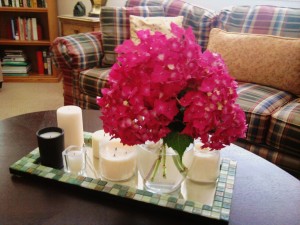 First of the season. Glad to see you.