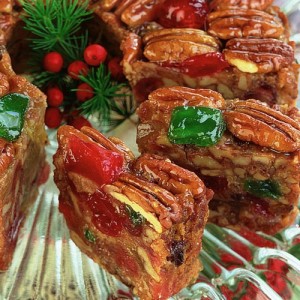 I like the ones in a circle with giant chunks of candied fruit protruding.

I don’t trust the cake-y ones. A chunk of fruitcake should offer some resistance when you pick it up. A stomach should know it’s been fed fruitcake. What’s the point if it just looks and tastes like cake?

I tried to make fruitcake at home a couple of times. Mine didn’t have the heft and the mysterious bits of things that surface from the ones you can order.

A friend makes a credible plum pudding with hard sauce. It bakes in a small, circular pan and after everyone else is done with it, sometimes she freezes the leftovers for me. The good thing about this is that, old or new, a hefty holiday treat looks and tastes the same after weeks.

Somehow words make this sound unappetizing. But my mouth waters and I am signing off now, headed to the kitchen to brew some strong coffee that is almost worthy of my once-a-year fruitcake festival. Sadly, I had to buy one at the market, because I haven’t yet ordered the best one available.

I have a favorite source for fruitcake. It’s Collin Street Bakery in Texas. This is not a paid announcement. It’s a sincere wish that I’d already ordered one from them so that while I’m writing this on a December Sunday afternoon, I could have a slice.

My mother introduced me to them by passing along to me all the fruitcakes her Southern friends ever sent her. Several were from Collin Street Bakery and I was immediately addicted. I love these people for making their almost-too-heavy-to-lift, DeLuxe Fruitcake. Look them up online, and be sure you ask for the DeLuxe. Big D. Big L.