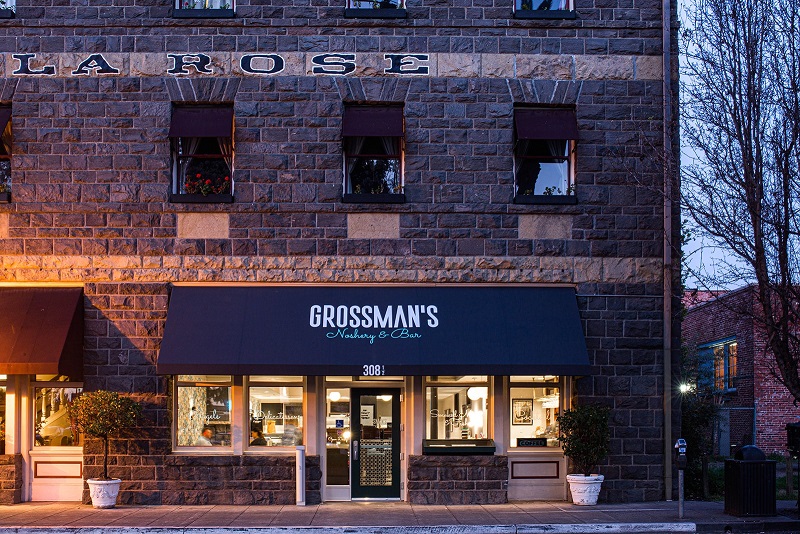 Everyone’s posting on social media about what they miss during quarantine, what they’re looking forward to when we’re allowed to mingle.  Some people say poetic things about giving and getting hugs and being out in nature. For me, it’s deli.

My friend, Karin Moss, and I are both deli lovers.  We share conversations about meals at our favorite delis from  years in the entertainment industry in L.A.  I don’t think it’s coincidence that I lived around the corner from Jerry’s Famous Deli in Studio City and a quick walk away from Art’s.

Now we’re both in Northern California eagerly awaiting the opening of a new deli in Sonoma County.  Full name:  Grossman’s Noshery & Bar.  We had lunch all planned but before we could catch even a whiff of a bagel, quarantine postponed our chat ‘n chew date.

Grossman’s is ready.  You can see them in there cooking up tantalizing stuff for pickup, but we’re not allowed inside yet. They occupy a corner of the historic Hotel La  Rose building in Santa Rosa across the street from Railroad Square where Peanuts statues stand, paying tribute to local genius Charles Schulz and watching over all that goodness. 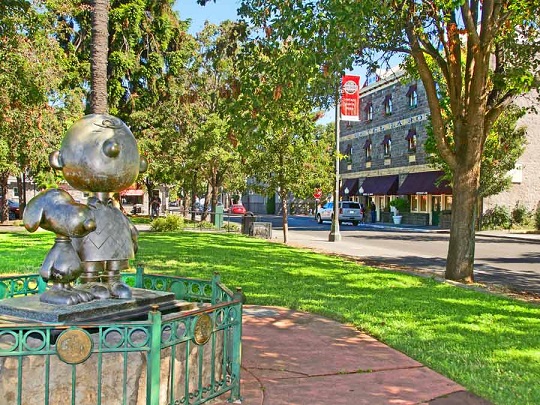 Snoopy and Charlie Brown watch the building across the street
because that’s where the deli is. 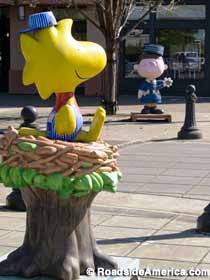 When we’re free to roam, here’s how I see this going:   Bagels to start, then properly fortified, a swing through the Russian River redwoods to catch up at Howard Station Cafe in Occidental.  Overnight on the coast and back through the woods in time for a tall corned beef on rye at Grossman’s. Maybe a little something to take home. A perfect Sonoma County weekend. 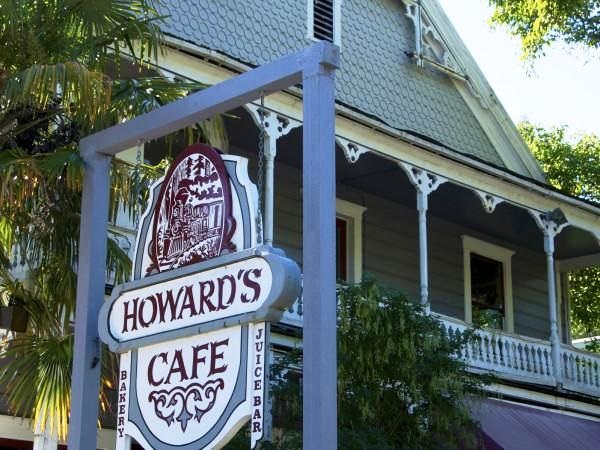 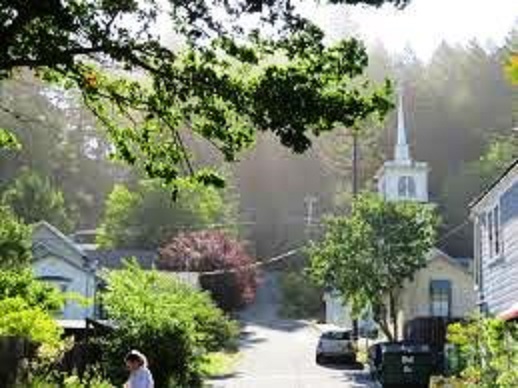 Bonus view of side street next to Howard’s.

Until this can happen, we chat about whatever subject is at hand and one of us signs off with some version of “Can’t wait for our nosh at Grossman’s.”

It may be better to give than receive, but I’d rather read your newsletters and cards than try to remember the past year in enough detail to write my own.

Memory isn’t always accurate in my case.  A friend once accused me of “painting the past in pastels.”  I beg to differ.  Every writer I know paints the past in different colors but not all of them are pale. I don’t always note in which months these things took place, but I do recall the emotion vividly.

Our little Caedan Ray had swine flu.  It began with symptoms of a regular flu but perhaps because it happened sometime in summer, an alert doctor tested for H1N1 and that’s what it was.  Immediately Caedan was quarantined with her mommy. Even her dad, Edan, couldn’t be close to her.  I wanted to go to L.A. to help, but the doctor wouldn’t allow that either.

One of the most frightening parts was that one day Caedan got quieter and more pale and lay down on the floor. Cathleen rushed her back to the doctor where she was found to be oxygen-depleted and put on respiratory therapy. This disease can affect lungs so quickly and with terrifying results. Better news – Cathleen had a “regular” flu, but no one else close to them got Swine Flu.

Caedan started Kindergarten in September, the youngest in her class.  She has just now turned 5. So far so good.  She loves school.  Loves the work and according to her teacher, loves visiting (too much it seems) with her schoolmates.

I remain in Mill Valley, north of San Francisco, while my family is in southern California, so I spend a good deal of time commuting.  It’s worth it for the blessed fog and redwoods near me – and then the warm reception I receive when I show up at the door to my girls’ place.

My biggest thrill so far this year (There are still a few days left and I wouldn’t mind another big thrill.  Are you listening, Santa?) was winning the John Steinbeck Short Story Award for my story, “Hank Williams Was A Friend Of Mine” which is from my collection in progress.

I hope each of you has some pastel-colored memory to keep.

In this story I am the grandmother and it’s my house that’s in the woods.  But that wasn’t where I headed for Thanksgiving.  I drove away from my northern California redwood forest, as I often do, to spend Thanksgiving in the city with my daughter and granddaughter.

Los Angeles was warm, leaning toward hot, the whole time I was there. It’s 400 miles from here to there on Interstate 5, which runs the length of California and then some.  On my drive south, there wasn’t a cloud in the sky. The sun was shining and everyone I encountered along the way was feeling festive.

During my visit, my granddaughter asked why I can’t live closer to her.  I said I wish that was possible, but I like cooler weather. In fact I love my Marin County fog belt.

Two days after Thanksgiving it was time to come home and since it had been around 80 degrees the day before, it didn’t occur to me to check the weather before leaving. I don’t like to drive in the dark, but once in a while in the pre-dawn, when traffic is light, it’s nice to get an early start.

About 5 A.M. I headed north, leaving the lights of Los Angeles behind as I slowly climbed the mountain toward Fort Tejon. (For non-Californians, that’s where Christo installed his giant yellow umbrellas.)  Rain began to fall almost immediately. The side window felt icy-cold. I left the Valley floor wearing a tee shirt and I didn’t want to steam up the windows with the heater and besides, I thought, teeth chattering will help me stay clear-headed.

The Grapevine – the part of I-5 that goes over the summit and then drops you down close to Bakersfield – is generally picturesque.  This time I couldn’t see a thing because the rain quickly turned to snow.

It came on so fast, it was a shock. Gusts of wind made driving a struggle.  The lack of traffic was a liability because there were few taillights to follow.  The town of Gorman at the top is about 4100 feet and I don’t remember a Thanksgiving storm before that powdered the junction white in minutes.

Snow piled up so the lane markers were no longer visible. Everything was fuzzy. I drove as slowly as possible, trying to get behind some big trucks in the right lane so they’d make a path I could follow.

Stopping wasn’t an option. Had I pulled over at the top, I’d have been snowed in and without chains, it could have taken hours to get out.  I said a prayer, fought the wind for control of my car, and drove on.

I sang loud to keep from getting dizzy and counted the minutes ’til the road begins the descent into the next Valley and there, at the truck stop where I like to refill my coffee, just minutes from the blinding storm, was the bright sunshine again.

The rest of the trip was uneventful and I looked forward to doing some Christmas decorating at home – stringing tiny lights that glow like a fairy tale in the northern fog.  Except when I got home there was no fog.  Only sunshine.  And no fog this morning either. And today is warmer than normal with a prediction of sun all week long.

I want my seasonal weather back. I need to get in touch with Al Gore and see if he can do something about this.

Watching the weather is a favorite hobby of mine.  I don’t generally get my weather reports from television, but I might as well be one of those people we see in comedies, who fixate on the Weather Channel and sit there for hours, soaking up data about places they’ve never been, never intend to go, and if they did go there, they wouldn’t know anyone. Those people are portrayed as coots. (One definition of  a coot:   simple-minded.)  A weather fanatic will say to no one in particular,  “I knew it.  I knew that system was gonna come in early.”

Except for not watching the Weather Channel (tornadoes and hurricanes are exceptions that demand TV coverage) I may be one of those people.

I check the Weather Channel’s website several times a day for places where friends and relatives live.  Every trip for me begins with www.weather.com where I can fill in the name of any city and see what’s predicted for the next ten days.

It might be an inherited trait, since my country born-and-bred father had a set of weather instruments on the back porch and glanced at them  several times a day, always remarking out loud on what he saw there.  He often disputed what the dials told him, and he was always right.  He could feel changes in his bones.

Something about working out in the fields as a boy and his own deep respect for nature had permanently tuned him in to the time for sowing and the time for reaping. His instincts often did not agree with the calendar. He’d wake up and announce that he was going out to our vegetable garden. “I better go pull up the radishes and the collards before the sun hits ’em again.”   And this while rain was still falling.   He knew when a big change was coming.

I don’t have the knack he did for predicting imminent change, but I’m always hopeful about it. Our problems may stick around, but at least we can count on the weather to change.  When my diagnosis is boredom,  just watching the weather offers promise.

One reason I love  my part of Northern California (and envy New Englanders)  is that the weather plays tricks on the forecasters.  Mother and Father Nature send along surprises  for us several times a month.  We’ll get rain when the sky was clear a minute ago.  Big winds arrive high up in the treetops, when the lower limbs don’t even know it yet.   Fog rolls in and out, but not always on the schedule we expect.  I’m disappointed when the fog fails to appear.  Like the redwood trees in the back yard, I rely on absorbing fog through my pores.

I like being surprised by the weather.  Keeping the family’s weather-watching tradition alive  (my brother does this too) the first thing I do when the day arrives is go see what the weather is like outside, and I do it again before sleeping.  It seems I’ve been making my own notations out loud to no one in particular, without realizing it.   (Another definition of “coot” might be “predictable.”)

I haven’t been a grandmother all that long and sometimes I forget a small person is nearby. They’re always listening, aren’t they?  One recent morning while I was visiting at her house, I opened the drapes and stood there for a minute with my coffee cup.  From the little girl who’d snuck up behind me I heard,

“Hammy, you forgot to say ‘It’s a beautiful day.'”