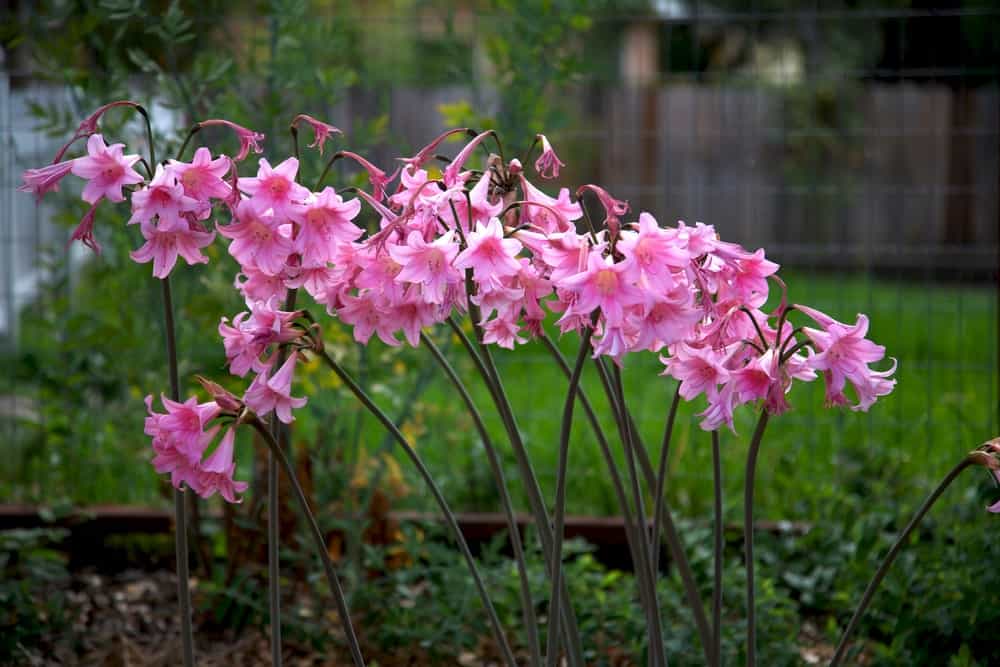 Naked Ladies show up in the oddest places in Northern California in July and all through August.  Clumps of them, pink and fragrant, with up to a dozen beautiful blooms on each leafless stem. They’re  energetic.  They’re sturdy.   They’re random.

They scatter all over the countryside in Napa and Sonoma and Marin in places where no one would have thought to plant them.  All of a sudden comes this magic in a distinct shade of pink, from a bed of weeds, a crack in a sidewalk, along fences, lining a country road, and in no particular formation. You have to smile at their tenacity and because critters don’t like them, they stay around a while.

There’s something mysterious and charming about them so I had to look it up.  Read on if you want to know too.

They’re in the lily family, starting life as a bulb. During the winter a plant with leaves appears, looking like any other plant.  Then the leaves die away and you can easily forget about them. A few months later during hot weather, up pops a bare stalk then another and another.

I wanted to know how they get scattered all over the place. Turns out they drop seeds which insure surprise sightings in years to come.  Once a bulb’s planted, you’ll never know how many will show up next season.

People say Naked Ladies are practically indestructible, but I assumed I’d lost the ones in my yard in Mill Valley a few years ago. A tree had to be removed right next to where the Naked Ladies bloomed the summer before.  Along with the tree and its roots, everything went.  Only dirt was left.

Then came the summer and overnight one bare stalk started pushing up, then another, beautiful and fragrant and naked. 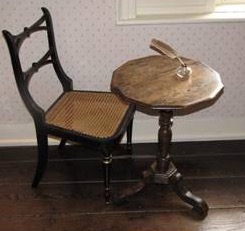 Jane Austen’s last novel, Sanditon, (in progress when she died) is coming to TV.  Masterpiece/PBS will film an 8-episode adaptation of the story.

It’s impossible to imagine how many thousands of pages she created sitting right there. A goose feather could meet no nobler purpose than to become one of the quill pens she dipped in endless bottles  of ink.

Filming begins in spring, 2019.  Never too early for eager Jane Austen fans to start getting excited.

We are delighted to announce our new drama, based on Austen’s final manuscript, Sanditon, developed by Emmy and BAFTA-Award winning writer Andrew Davies.

ITV’s Head of Drama, Polly Hill commented: “It’s a rich, romantic, family saga built upon the foundations Jane Austen laid. There is no one better to adapt her unfinished novel than Andrew who has an incredible track record for bold and original adaptations.  We’re delighted to commission Sanditon from Belinda Campbell and her team at Red Planet Pictures.”

Andrew Davies added: “Jane Austen managed to write only a fragment of her last novel before she died – but what a fragment! Sanditon tells the story of the transformation of a sleepy fishing village into a fashionable seaside resort, with a spirited young heroine, a couple of entrepreneurial brothers, some dodgy financial dealings, a West Indian heiress, and quite a bit of nude bathing. It’s been a privilege and a thrill for me to develop Sanditon into a TV drama for a modern audience.”

Belinda Campbell commented: “Andrew Davies’ compelling scripts bear all the hallmarks of the biting social commentary and realism that makes Jane Austen one of the most widely read writers in English literature. Sanditon’s themes of class divide, ambition, powerplay and matters of the heart are as relevant today as they were in the early 19th century and we can’t wait to bring this incredible adaptation to life for ITV audiences to enjoy.” 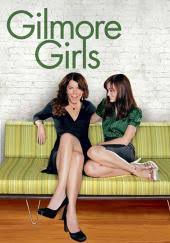 We’re watching Gilmore Girls again.  And again.  The youngest person in the house is now exactly the right age to find Lorelai and Rory fascinating.  Everything about their relationship, their town, their troubles and triumphs, their fast-talking search for wisdom – all of it  – watched and discussed right here.

Writers/producers, Amy Sherman-Palladino and Daniel Palladino are creative past any point I can imagine.  Because of the quirky charm of Gilmore Girls (now available on Netflix) I followed them to their next shows, Bunheads (haven’t found it streaming yet) and The Marvelous Mrs. Maisel on Amazon.

When my blogging buddy, Dave Williams and I were both on the radio in Los Angeles, he spoke often of his devotion to the show. I came to it later thinking, if Dave’s so crazy about this, I’ll give it a try.

Now, thanks to the magic of streaming, we have the opportunity to re-visit the town of Stars Hollow and share interesting conversations at home with the resident teen. 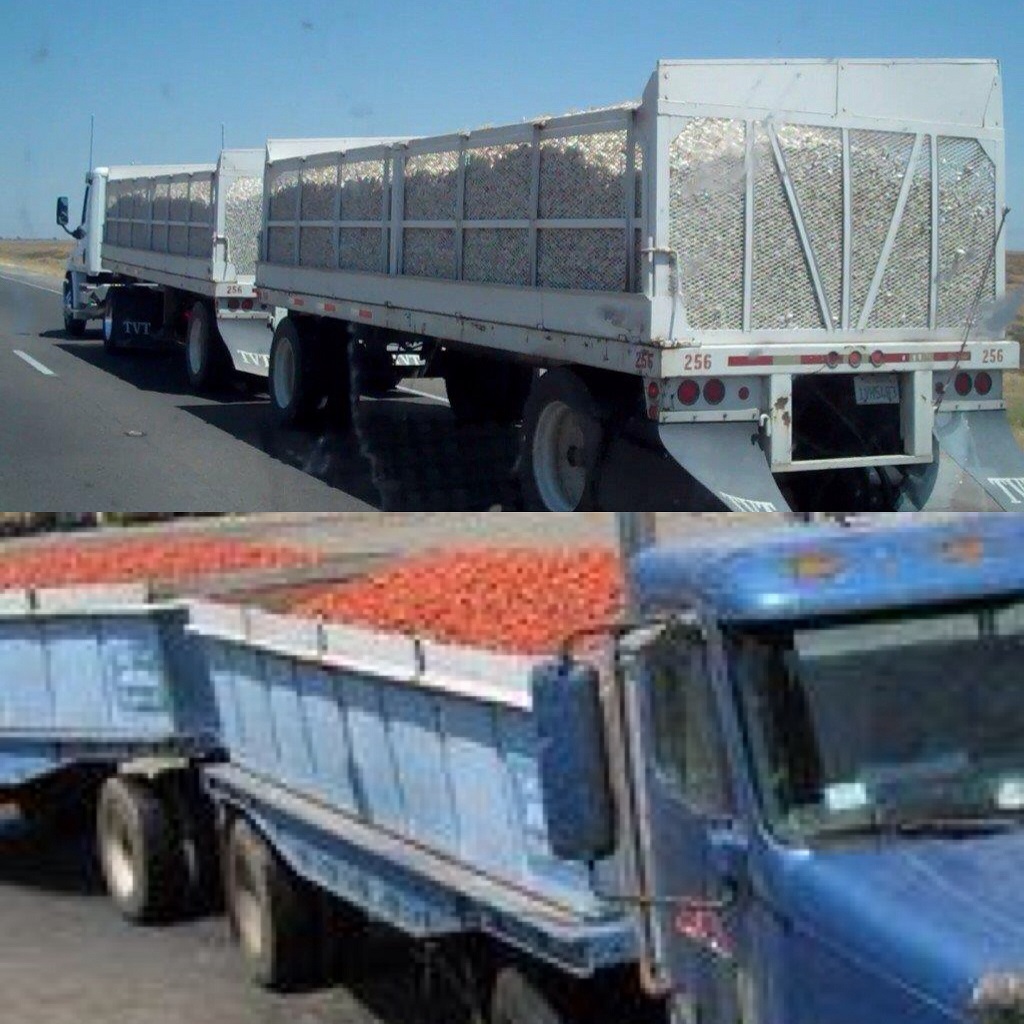 I’ve spent a lot of time driving I-5 from Northern to Southern California and back.  During summer the center of the state bursts with flavors. I know all the nooks and crannies, the truck stops, the rest stops, and the bounty of good regional food sold at specific convenience stores along the way. Maybe someday there’ll be a song about I-5.  After all, Route 66 had to wait a while before Bobby Troup sang about it.

I-5 parallels the West Coast from Mexico to Canada.  There are long stretches without much to look at but signs point to quick side trips, if you’re inclined.  I’ve been on this road so often I can direct you to everything from salad to dessert.

This month, a short trip off I-5, it’s the Gilroy Garlic Festival. Gilroy named itself the Garlic Capital Of The World and nobody disputes it.

When you drive I-5 you learn when crops are planted and harvested. Ahead of me I spy two crucial ingredients for great spaghetti sauce.  One truck rolls along carrying garlic, followed by another with tomatoes, home-grown and soon to be shared in markets everywhere. If you’re on I-5 during summertime you don’t need to wait.  There are enough roadside stands on your way home to provide everything you need for supper.