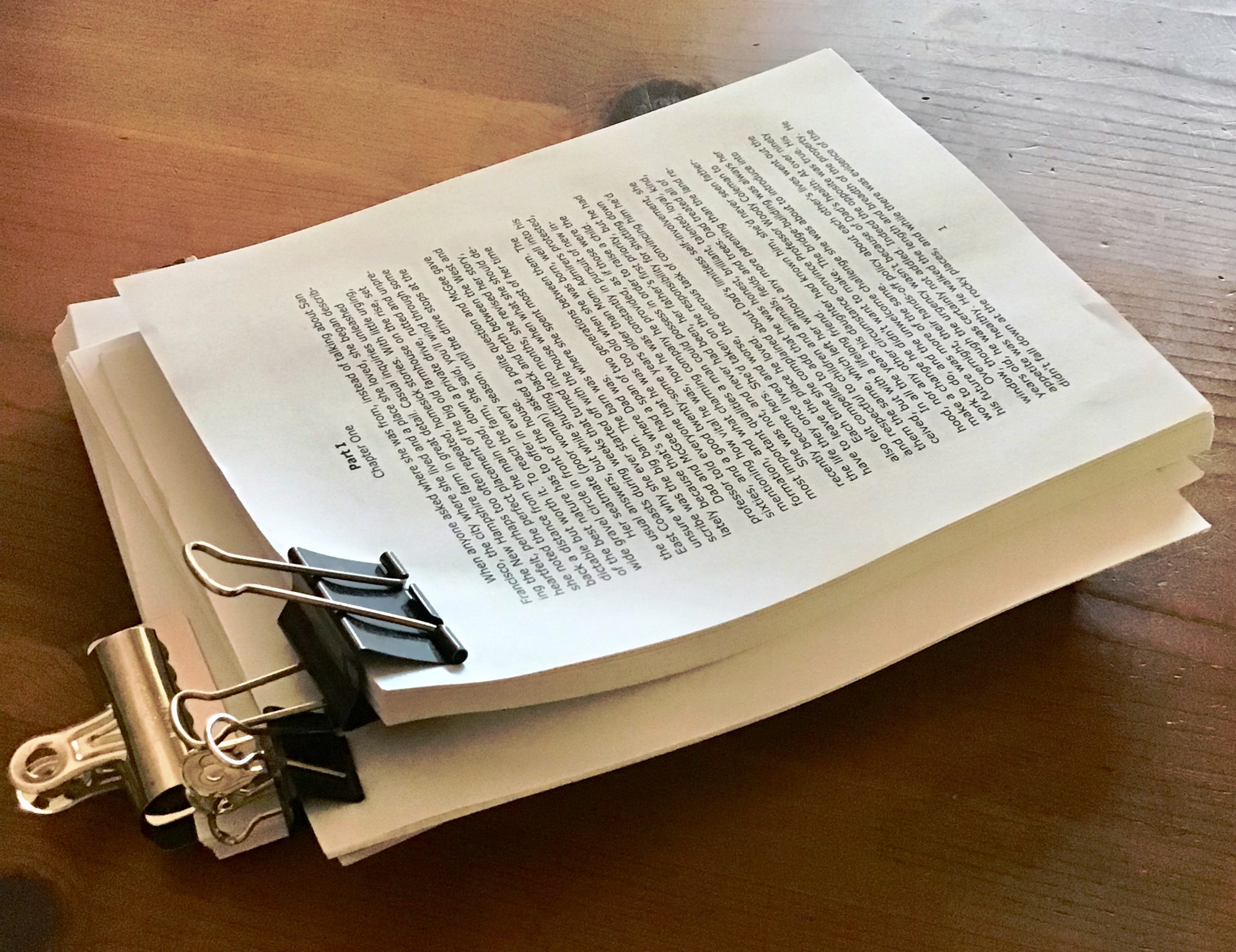 I spend hours at a keyboard every day and I now have so many versions of my new novel in progress, I lost track of a character I really like.  What happened to Sofia, that little girl I wrote?  I stumbled through multiple files with confusing names, looking for her.  I should never revise when I’m tired.  Or distracted. Or out of coffee. Cutting and pasting and moving paragraphs onscreen offer freedom but they’re risky for a person like me.  My keyboard needs a warning device. Ding, ding ding.  Are you sure you want to change that again?  Ding ding ding.  Maybe wait til you’re fully awake to create another file.

I started as a writer with hard copies, pen in hand, scribbling in margins. I’m glad to have other choices today, but I had to stop scrolling through this project for a while to sort it out.  Drastic measures were needed. I moved all the files to a flash drive and handed it over to someone else to print. I dropped it off one day, picked it up the next, and in between took a little breather. 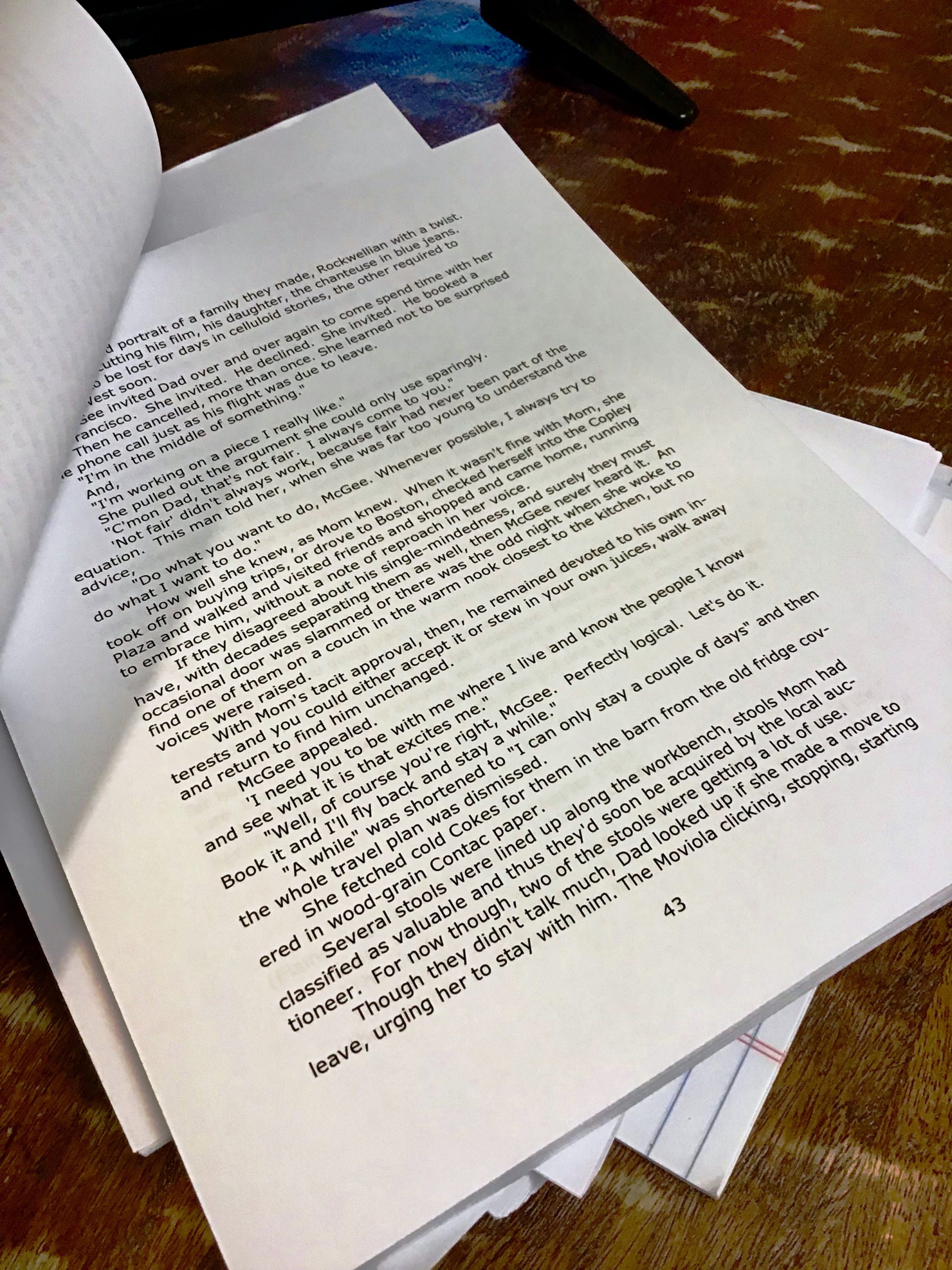 All the versions are waiting for me on my work table now and those hard copies recognize me. They tell me we’ve done this before, we’ll work our way out of this.

Now that I’m back to editing this the old way, my characters’ thoughts and dreams and misdeeds will be spread all around the room, on the green carpet and on the tall table and on the redwood plank desk under the window.  One strong breeze can scatter pages and change lives.

This morning I found my missing Sofia.  She was right there when I turned over one more printed page, which led me to find the file where she’d been living on the computer. It turns out she isn’t in the story very long but now that I’ve located her, I’m so happy to see her, I’ll give her more to do. 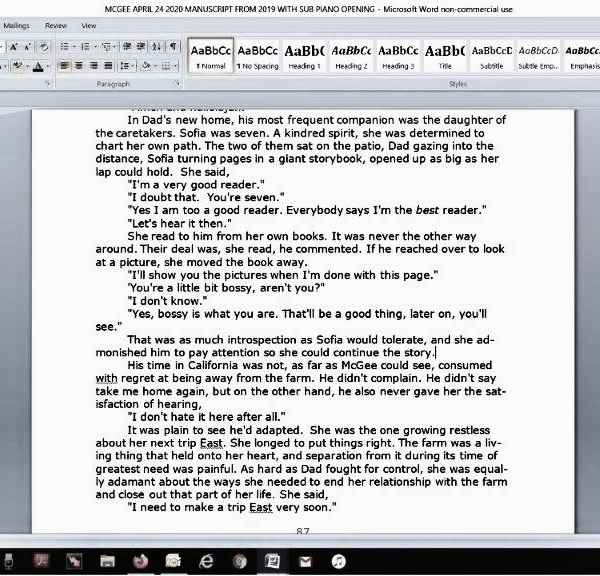 A scrolling digression:  Did you see the video of the one year old girl in France trying to make magazines behave like an iPad?  Scrolling was obviously what she learned first so it was second nature.  I wonder if there’ll be hard copies in her future.

My files disappear into my computer with great regularity – even the ones I name myself using such explicit language that I’m certain they’ll pop up when I need them.  Wrong.  Whatever language I used is not the language that comes to mind when I search for them.

I have had this trouble going as far back as the Yellow Pages.  I have never been able to quickly decide what the Official Namer Of The Yellow Pages will call, for instance, car repair.  Oh – I say car – they say auto.  And so on and so on.  My only successful Yellow Pages search was pizza, after they created pages in the “P” section for it. Everything else in that book remains a mystery to this day.

Those were the early days – the days of innocent assumption, believing that my own logic was clear and superior and that I categorize the same way everyone else does.  Today I am stripped of that illusion.  Nothing points out differences in thinking more quickly than a searchable  database.

Recently I was one of several people looking to find a specific CD holder for children’s music.  This favorite CD holder was shaped like a ladybug.  It went missing.  The young owner of the ladybug was inconsolable – more over the container than its contents.  We tried every store we could think of.  No children’s CD holders in friendly shapes.  We went online.  Meanwhile the child decided she might be even happier with a butterfly-shaped CD holder-replacement.

I typed in every conceivable description of such an item that I could think of.  I changed the order of the words. I found out during this search that they are often called “CD wallets.”  I added that phrase to my searches and kept looking for one shaped like a butterfly.

An ebay-friendly acquaintance was puzzled I was having such a problem.  He said everything relies on the way you seek.  Duh.  I already know that.  But evidently I don’t speak Search language.  He said it just comes naturally to him and he let loose a stream of descriptive words in a sequence I would never have thought would work.  Meantime my daughter had also asked a Search Engine Specialist who gave her the words that led to the one and only butterfly CD holder that any of us found. She bought it immediately and happiness is restored.

This experience points out again that my thought process in no way matches the way searches are conducted. It doesn’t even match my own thinking from the previous day. This is not a good outcome for a writer who opens the same files again and again.  I name them when I first create them.  Evidently a gremlin enters my brain’s Center Of Logical Response while I sleep and by the next day I am hunting endlessly.  When I accidently locate a correct folder, it’s now called something I find hard to believe.  Who named this file?  I am forced to reprise the old-school write-it-down method.  I open the file, make changes, then write the name of the file on a piece of paper and attach it to the hard copy of the manuscript in progress.

If I can’t even find my own files, with my own quite specific descriptions, is it a wonder I can’t figure out what to call something I’m trying to buy?  Google tries to help by suggesting that perhaps I might try another word. My friend Catherine tries to help.  She says  ask the saint of lost objects.  She’s not Catholic but she speaks to Saint Anthony frequently and she says he helps every time.

I need a Saint of Search Engines – one who’ll whisper in my ear “Look here.” and point me to which words to type, which items on the pull-down menu to select.  And while he’s/she’s at it, explain who decided  which letters will comprise an entire text message?

I don’t even try to think like a search engine anymore.  These days I ask everybody, “What would you call that, online, I mean?”  The correct answer is generally the opposite of what I thought.

So my wish has been granted in a way.   Friends who communicate clearly with search engines are my new Search Engine Saints.