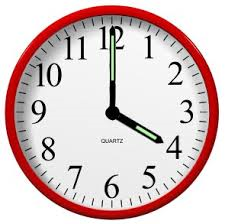 Four o’clock is golden.  I can hear four o’clock coming, as surely as if it’s wearing a bell around its neck. I feel it in my bones.

It’s the turning point in my day, and it has nothing to do with its proximity to five pm.  Time to exhale. Get up. Think about what’s next. Could be coffee. Could be something intoxicating. (Only a rude person would suggest four o’clock is too early for it.) It might be a walk around the block or aimless wandering into another room.

Four o’clock’s intent changes with the seasons. In winter, the light is leaving and there’s the pleasant prospect of an early evening. In summer, if I choose to follow the light, there’s plenty of time left to see where it leads.

Professional schedules these days are often malleable, mutable, personal.  We may still be accountable to somebody, but how we do it varies.  It seems to me it’s our own business how we set our internal clocks.   Four o’clock is my touchstone, the lodestar.  It insists I pay attention.  Time to tap into fresh resources and keep going, or wrap it up for the day.

I’m guessing everybody has a magic hour, declared or undeclared, a time when everything shifts.  Four o’clock is mine.  What’s yours?

2 thoughts on “The Magic of Four O’clock”