My broadcast buddy, Dave Williams, and I decided to write a book together about what life is like for former rock and roll disc jockeys who are now more mature in years, if not behavior.  We’re grandparents now.  We’re both still working, and everything about the way we work has changed. We haven’t written the book, but we talk about it a lot, which is almost the same thing.

We’re on opposite ends of the Boomer curve.  I’m the older one.  He’s the former high school student who stood outside the window at the radio station where I played rock and roll music (KROY, Sacramento, CA) where fans lined up before heading off to join the local cruise, with their car radios turned up loud. Somebody ushered Dave in to say hello and it wasn’t long after I left that Dave took up that same chair alongside those same turntables (yes, turntables) at the station.  We became friends back then and we’re still friends, decades later.

A career spent talking into microphones is nomadic.  When we began, we had to be in the same physical location as our audience.  We moved home and hearth and families to the next town (“markets” in broadcast-speak) with the goal being to eventually occupy a chair in front of a microphone in one of the major markets.  Both of us accomplished that.

It would be impossible to overstate how drastically technology changed our industry.  Those of us who worked in radio, television and print, ran fast just to keep up.  In order to survive on the air, we had to learn new skills overnight, and we’re still adjusting.

When we began, we launched our records from a slip-cue position (you can see the slip-cue technique demonstrated online) with one hand holding the record while the other hand twirled knobs or slid controls up and down to regulate our microphones, our music, and our commercials (spots) which ran in a separate cartridge machine and often got stuck or completely failed, requiring a new plan.

Both hands were engaged, along with head, voice, and yes, heart, all required to fast-pedal in order to sound either upbeat and party-ready or mellow, depending on the station’s music.  In larger markets, we sometimes had engineers who did the twirling and regulating, but much of our time on the air was spent with us doing all of it at once and never letting it show in our voices.

Technology altered all that, and moving from music into talk radio also required a different set of skills, but through it all, it’s been the “air personality” as we were called, who had the biggest, fastest adjustments to make, just to stay employed.

I don’t talk for a living anymore, but Dave still does (KLIF/ Dallas every morning.)  The studio in the picture above is where I learned to slip-cue a song before moving into a whole new world.  (Thanks Gary Avey, KHSL, Chico, CA.) The studio below in this “after” picture is similar to where Dave works now. 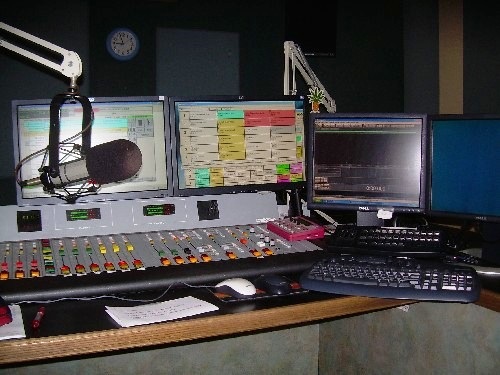 Today I write in Northern California, connected to my computer, and if I have something to say on the air, I don’t have to leave this room to do it. Dreams we never could have dreamed during the Age of Aquarius.