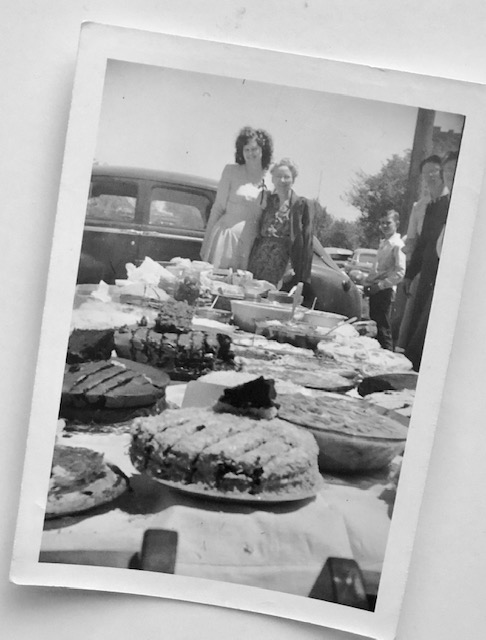 Desserts from the church ladies

Homemade food was a  highlight of every All Day Singing With Dinner On The Grounds. Tables were made of planks laid over sawhorses then covered with oilcloth, then the rows of sawhorse-tables were loaded with every Southern specialty from the best home cooks in the world.

At the end of many of these tables were stools that held washtubs filled with tea with big blocks of ice floating on top and tin dippers attached with string to the handles.

Find a picture.  Find a story.  If that’s not a rule, maybe it should be. I’m surrounded by boxes and files and albums and scrapbooks.  It’s the backbone of much of what’s becoming The Glory Road., the stories, the stage play and now the book.  A photo turns itself into a scene.

That’s Mother (Sister Fern) on the left in this picture. She’s changed from her performing dress made of clingy jersey into something cooler, and she’ll change back again after dinner, the midday meal in the Deep South. She’s  probably complimenting that church lady next to her on her fine contribution to this bounty.

I was off in search of my favorites.  Somebody mistakenly put Ambrosia over there on a table with all the fruit salads when to my mind Ambrosia was a world apart from ordinary food. It was the Alpha and Omega,  the beginning and end of every dinner spread laid out at every Singing, every Revival, and every Sunday afternoon potluck at every stop on Route 66.

Mother was partial to Jell-O and she’d choose from a whole table full of it, some of it made in intricate molds, some studded with fruits, and other bowls of the red and green and orange jiggly stuff were filled with mysterious chopped items. She loved them all.

Leslie Ray headed for the chicken wings, the potato salad, then the table with all the breads – biscuits, risin’ rolls and cornbread. Daddy piled up a plate with  barbecue and beans. He wandered the grounds balancing his plate and a Dixie cup of sweet tea, in search of the cook responsible for his favorite barbecue. Reverend Raymond Jones could talk beans with anybody til closing time.  One of us had to hunt him down when it was time for the family to be back onstage.

Find an old photograph. Write some notes.  I don’t want to miss a memory.  They’re gifts that come and go when they please.

I miss cafeterias. There isn’t an honest-to-goodness old fashioned cafeteria within hundreds of miles of my house. We’ve got plenty of buffets, sure, and they offer choices, but all-you-can-eat isn’t the point. Automats are fun but they don’t come close to the cafeteria experience. Putting in your money and watching food come out of a slot is a novelty, but it can’t duplicate a cafeteria’s piping hot steam tables or the beds of crushed ice with tiny dishes set inside like jewels.

In the 1950’s, on visits from our home in the Deep South to our Glendale, California grandmother’s house, my brother and I begged to go to Clifton’s Cafeteria. At the Pacific Seas on Olive Street in downtown Los Angeles, with Gramma in the lead, we’d dash to find a seat near a waterfall. 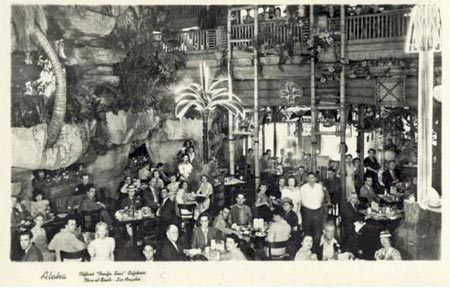 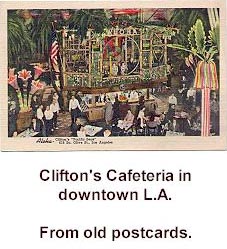 Clifton’s Pacific Seas interior featured Tiki huts and tropical sound effects. On the way out, we kids chose a toy from the Treasure Chest.

At a cafeteria you go down the line and put together your own version of the best meal you can imagine. One day you crave macaroni and cheese but you’d like a little something else on the side. Or you have a hankering for cornbread and everything else is selected in terms of how well it complements the bread. In a cafeteria, we didn’t need to explain our choices to anyone.

We learned how many kinds of puddings there are, and marveled at all the ways Jell-O can be served. In fact, the smaller than home-size dishes were part of the charm. You could go back for more, but most of the time we didn’t. A cafeteria reinforces the eyes-bigger-than-the-stomach urge. We filled our trays with an armada of tiny bowls and plates, lined them up in front of us and whatever we didn’t finish, someone else at the table always did.

Clifton’s Brookdale Cafeteria, still in business on Broadway in downtown Los Angeles. It’s called the largest public restaurant in Southern California, seating 600 at once. Still, it feels cozy inside – like the lodge in the redwoods it was created to emulate.

“Big” doesn’t begin to describe the inside of a Clifton’s. Inside the Brookdale, for instance, there are several levels for dining and a small chapel that’ll play you a recorded blessing before you leave. Jell-O at Clifton’s. Let me count the ways.

What this country needs is more cafeterias, but if that way of dining isn’t coming back, perhaps we can compromise on a tasty alternative. We could make a new rule that every town must have a small cafe or diner every few blocks. Affordable. Nothing deliberately retro-chic, just real food at real prices so it could serve a diverse clientele. And every one of these places should be required to offer a blue plate special every day, with a choice of Jell-O flavors and at least three kinds of pudding, with mandatory Tapioca.