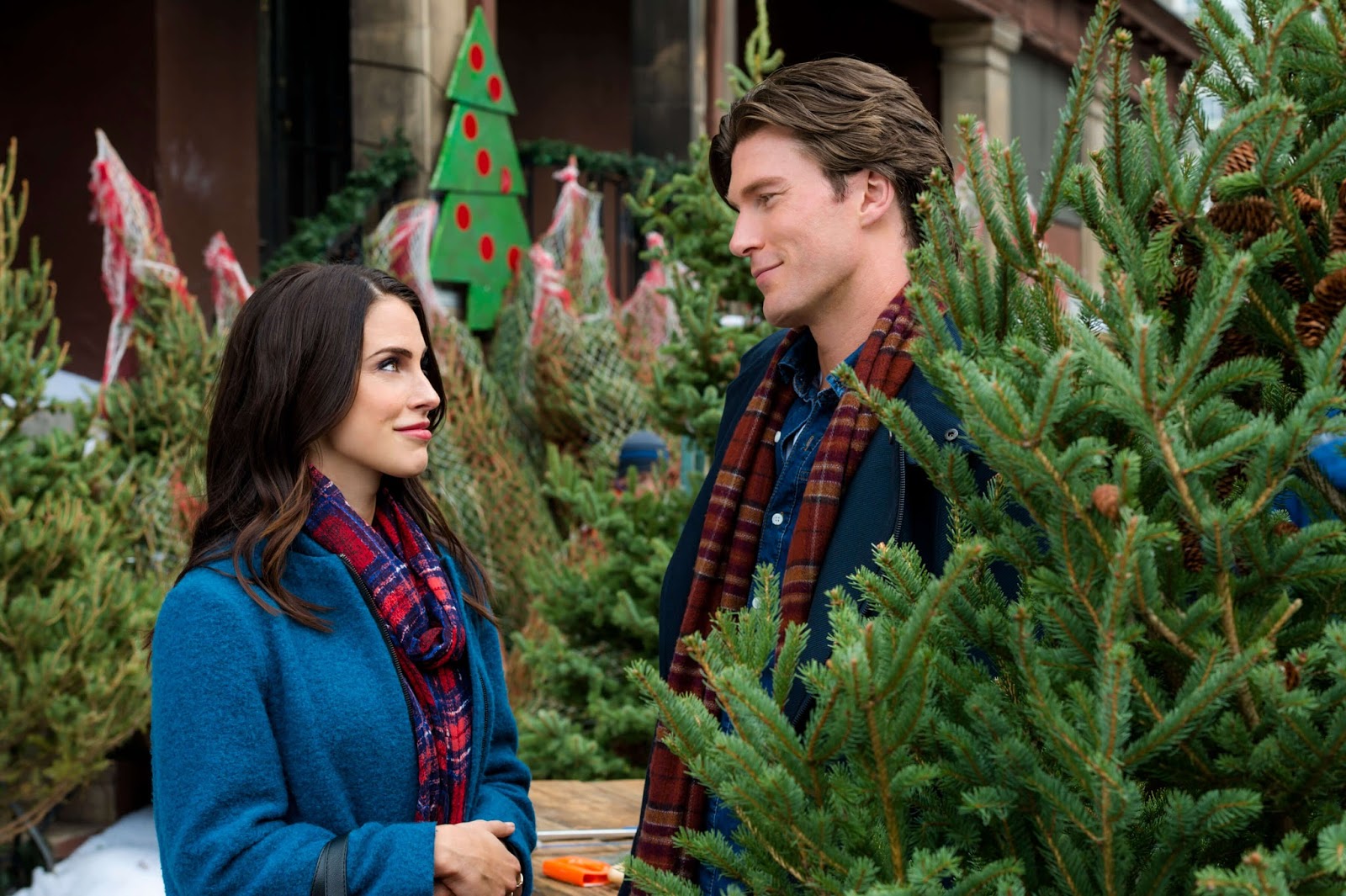 Friends in snowy places are posting their decorations already so it must be time for Christmas tree shopping.  It gets cold here in Northern California, but the snow falls only at higher elevations so choosing a tree isn’t quite so picturesque. If we go after dark, there might be coats and scarves and maybe mittens involved, but it’s not exactly like your snowy scenes.

I have a picture of how it should be and I don’t want it spoiled. It’s Christmas movies, Christmas commercials, Christmas ads, Christmas specials on TV.  They mess with my expectations. Everything looks like the inside of a snow globe.

Of course there should be snow at the Christmas tree lot, but it’ll be the dry float-y kind that makes everyone look good.  The snow won’t make your hair or hat soggy.  At all.   Music will waft from the trailer/shed where the people who run the tree lot stay warm.  Two people over by that giant fir will all of a sudden start dancing.

Nobody’s nose will get red in the cold. No one will be  impatient because you can’t make up your mind. When you find THE tree, here’s what happens next. This is all real.  It happens at every Christmas tree lot where there’s snow.Once you decide which tree, you’ll find the gloved hand of a pretty lady/handsome man is already holding onto the other side and the two of you will decide to settle your tree differences over a cup of cocoa with marshmallows or bourbon stirred in. I have no idea what you people in tropical climates are going to do for romance this season.

Three evites and two phone calls and several emails this week reveal the plans of friends and family.  Ed and Barbara made reservations at the Indian casino near them in the wine country of Northern California.  They’ll share a restaurant meal with a son, daughter-in-law and grandson.

Sue and John are headed (with lab, Lucy) to Santa Cruz for a long weekend. They’ll take walks on the beach, eat too much, toss the ball for Lucy, play board games with family and friends,  and then do it all over again.

Peyce in Los Angeles, an actor/singer/great Southern cook, has his gang of vagabond performers over every year.  Since I never make it on the day itself, I always hope to find Peyce at home a couple of days later – along with some of his leftovers.

This season never disappoints – no matter where my family has been and no matter how few or how many of us gather.  And there was that one year – a fluke – when plans changed and I found myself alone on turkey day.  Still, celebratory feelings prevailed.  I called Max’s Cafe , ordered one of their special turkey dinners to go, picked it up and kicked off my Christmas movie DVD-watching extravaganza.

My daughter and I have often traveled to join the rest of the family at someone else’s house.  We’ve also gone the restaurant route with friends, and maybe we’ll do both those things again, but when we’re someplace else on turkey day, we start getting really excited on the way home because we know that we’ll end up cooking the whole meal ourselves within the next couple of days.  We crave the leftovers.

Thanksgiving is a good time to express gratitude.  It’s a good time for hugs and memories and watching the Macy’s parade first thing in the morning, and it’s also great having all that food around over the weekend.

Who are those people who claim they’re sick of turkey two days later? Most people I know have plans for the food they don’t consume at the one big meal.  You won’t hear us complain about all that turkey.  We’re not the ones asking the TV cooking show hosts for new ways to treat the food the next day and the next.

I’ve watched my brother gleefully attach our grandmother’s (God rest her soul) old fashioned food grinder to a counter top as soon as the dishes are cleared so that he can claim some choice chunks of turkey for his famous turkey salad the next day.

I regularly bake too many pumpkin pies so we can have pie for breakfast for days.

I don’t understand the need to disguise leftovers with clever recipes. If you’re concerned about the leftovers from your own feast, not to worry, send ’em on over here.

It wouldn’t be Christmas without syrupy movies.  Along with fruitcake and continuous holiday music, nothing says ’tis the season like the Hallmark Channel and Lifetime.  With a remote and a DVR, it’s time to wallow in sentiment.

My holiday viewing schedule is so packed, I’ve taken to recording all the Christmas shows.  Then I scan the plot synopsis offered by the cable company, pick a show, grab a cup of coffee, sit back and push “play.”  None of the plots are complicated, so I can leave and come back, leave and come back without missing a major development.

I’ll watch just about any Christmas movie, good or bad.  But this year there are so many, plus new ones arriving at the local theatre, I’ve been forced to be more selective.  I won’t  watch movies about a real-life earthly member of Santa’s family, whose personal complications may or may not affect the timely delivery of toys.  Santa’s family just doesn’t interest me much.  I’m also not fond of mean-spirited Christmas movies.  Hitting and yelling and blowing up things and drinking and cussing don’t feel uplifting, so I skip those.

There are at least two seasonal movies that stand out from the rest as memorable, each for different reasons.  My current favorite, which I watch every year, is One Special Night (1999) with Julie Andrews and James Garner.  I’ll watch those two in anything.  I love this movie most for portraying two mature people with full lives.

The other standout took me a while to warm up to.  It’s Noel (2004) with a stunning cast, including Susan Sarandon, Alan Arkin, Penelope Cruz, Robin Williams, Chazz Palminteri, and others.  It’s an odd story and is very nearly not Christmassy at all, depending on your point of view.  But I haven’t been able to forget it, so I’ll try to find it again.

Lest you think a couple of quality offerings make me a discriminating viewer, oh no, no.  Those two are the exceptions. Most Christmas movies offer only two basic plots.  The first involves someone whose beloved just passed away.  Along comes another someone or a young family missing a spouse and all are united after only a few minor glitches.  Summary of plot number one:  Completion of the family unit.

The other plot is becoming more popular.  These stories tell how the twin evils of ambition and technology conspire to rob our leading man or woman of their true selves, leaving them incapable of feeling the spirit of Christmas.  As these movies get closer to the end, cell phones are thrown away, major job promotions are turned down, snow storms create whiteouts that bring commerce to a halt long enough to force our hero/heroine to slow down and learn some Christmas lessons.  Synopsis of plot number two:  Dude, mellow out.

One favorite sub-plot involves removing these over-achievers from an urban area and plopping them down in bucolic settings where expensive wardrobes are ruined and hilarity ensues.  The movie unfolds in a charming cabin or a country house far away from the workaday grind that’s eating them alive.

There we have my thumbnail description of every movie that’s playing between now and the end of the year.  Add the every-year Christmas repeats from Charlie Brown and Rudolph and Dr. Seuss and Bing and Rosie and the gang at the Inn, and it’s a dash just to keep up.

Of course I know what’s going to happen on TV this season, but that doesn’t mean I’ll quit watching.  Predictability is one of the joys of Christmas.  Only a Grinch would suggest otherwise.