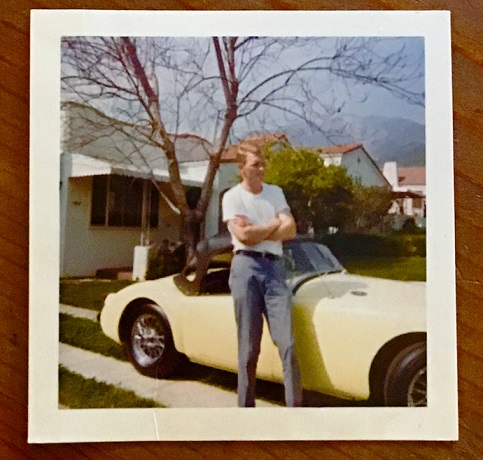 This is my brother outside Gramma K’s house on Raymond Avenue in Glendale, with the Verdugo hills rising in the background.  Gramma was the first of our Southern clan to move to California.  Leslie stopped by to show her his latest car.

During his rebellious period in the late 50s, Leslie left our house in Louisiana to live with our mother’s mother.  It wasn’t just teenage rebellion that brought him west.  The car she promised to buy him had something to do with it.  There was a great deal of bargaining between Gramma and our parents,  who were always in motion, traveling the Deep South in their evangelist/pastor/gospel performing circles. Their nearly-grown son objected to every part of our life and threatened to run away from home.

This is not the car she bought.  That first one was an old Pontiac that got him through Hoover High School, through plenty of traffic tickets and a months-long ban from Bob’s Drive-In.  When the rest of our family joined him in California, Leslie taught me terrifying freeway merging lessons in that Pontiac.

The yellow car was many vehicles later,  one of several sports cars he bought on his own and drove too fast.  Then there was a plane, then motorcycles he raced.  Nothing slowed him down.

This next picture was years later when we all gathered at Gramma’s for one of our Sunday suppers. 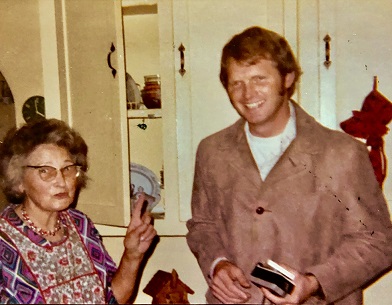 Leslie Ray is reacting the way he always did
when Gramma scolded.

She’s re-telling the story about how many times she took his car keys away during high school and hung them on a nail in the kitchen.  She confiscated the keys after each infraction and threatened to leave them there, but he always knew he could charm her into giving them back.  When the nail wasn’t displaying my brother’s car keys, it was holding her  beloved Vidalia onions.

All of us who traveled Route 66 back and forth from the South to California brought her Vidalias when we could get them.  Gramma added a thick slice of sweet onion to her morning biscuits,  her Southern tradition continuing in Southern California. To hang onions from that nail, she dropped an onion into the toe of an old stocking, tied a knot, dropped in another one and kept knotting until she had a pearly Vidalia necklace.

I’m working on a collection of stories and essays and while the dramatic milestones, the setbacks and the triumphs get much of the attention, every now and then one of these small moments nudges, wanting to be heard. Today I’m thinking of my tall and charming, silly and stubborn brother.