Mother’s dream had several parts.  Write songs.  Get somebody famous to record them.  Get a recording contract.  A pink Cadillac.  A mink stole. Sing at Ryman Auditorium.

Most of these had come true by the time this picture was taken at Nashville’s Deejay Convention in 1959. She appeared on Wally Fowler’s All Night Singing, originating from Ryman Auditorium, broadcast on WSM, standing alongside many Southern Gospel greats.  See her in the lineup in photos below. But the next part of the story was a storm of her own making.

When this picture came back from restoration, I was reminded of how much this looks like Fern’s happy ending, but indeed it was not.  It was just the start of her battles with the head of her record label, legal wrangling, waiting for a single from the album to be heard on radio, and the greatest  deterrent to a long tour, being away from Daddy.  She was nearly paralyzed without him nearby.

I’m in the editing process of my book, now called The Glory Road: A Gospel Gypsy Life, which will be released early next year from University of Alabama Press. This is the part where old pictures are restored to go into the book while I spend the next two weeks on the final, final pass through the manuscript.  When I send this version back to the Press it moves into copyedit, design, legal permissions (lots of songs quoted) and all the rest.

I’ll be right here with updates about my own dream, which includes telling family stories with a few songs attached. 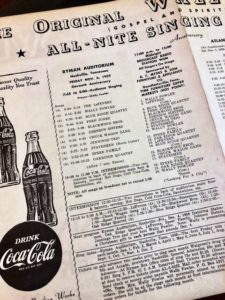 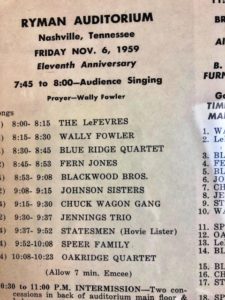 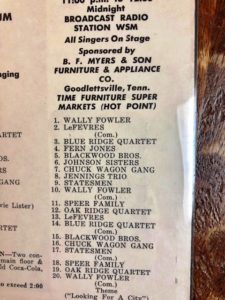