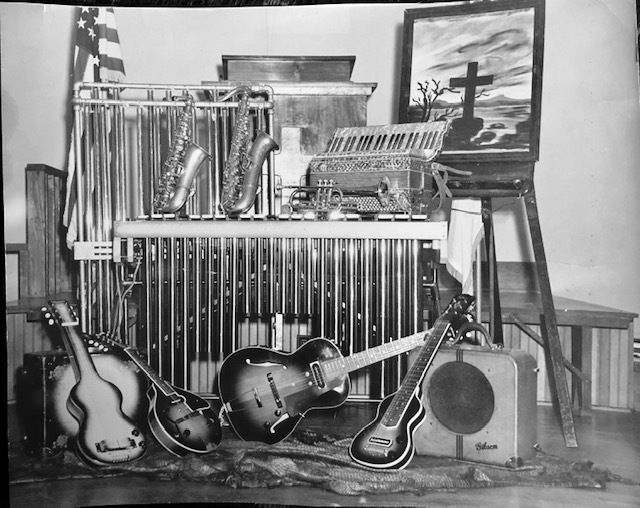 This publicity photo was taken in the early 1950’s as religion was becoming entertainment. Not all of these instruments belonged to our family’s basic traveling unit.  Some did, but others were added at different stops as musician friends joined us all over the South.

As we toured, we performed on the radio, in churches, in auditoriums, in theaters and under revival tents and as The Joneses’ popularity grew, the same thing was happening with other musical evangelists.

We’d roll into town and someone would show us the publicity flier from the last evangelist who came through. Disc jockeys at radio stations told us who played and what they sang and how they were received.

Mother was in charge of our publicity.  She handled it in an amazingly efficient way from the front seat of our big old sedan.  Occasionally we updated our photos, which were turned into wood cuts she mailed ahead for printing purposes.  She designed our fliers in advance of appearances, then as soon as we arrived in town, she talked with sponsoring organizations about whatever changes were required.

As I’m organizing photos from those years, I happened on this one, used for promotional ads in newspapers, and in programs and fliers and storefront posters.  See that picture on the easel on the right? That’s a chalk drawing done by Mother during the course of an event.  Yes, that was considered a legitimate attraction and several other evangelists did the same.

An announcer would say, not only is Sister Fern about to sing for you, but she will also put a blank canvas right up there on that easel, where she’ll create one of her unusual chalk drawings while you watch.  Music would play.  Those who’d  seen this performance before reached for their billfolds and purses.  The drawing would be auctioned to the highest bidder and  proceeds would go back into the community, into the hands of whomever booked us there.

I haven’t seen one of her creations for years now, but perhaps some of them still exist in homes somewhere along Route 66.